Taking Dried Food to the Next Level

If you’re looking to preserve food for the future, freeze drying is an innovative technique that can help protect perishable items. While many people use traditional freezing to preserve vegetables and meat, freeze drying provides a useful alternative that doesn’t require refrigeration or preservatives.

It can also be a great option if you’re planning on traveling with food or want to avoid using harmful additives. In this article, we’ll do our best to answer the most common questions folks have as far as how to freeze dry food.

What is the Freeze-Drying Process?

With freeze-drying, the process is slightly more complicated than traditionally freezing. Freeze drying uses a unique method called lyophilisation. During this process, the food is brought to a below-freezing temperature, and the water content is then removed using a high-pressure vacuum. The water is extracted in the form of vapor after which it returns to the form of ice on the surface of a condenser.

This process provides a preservation method that doesn’t alter the internal composition of the food. Freeze dried foods need to be rehydrated to return to their normal state for consumption. 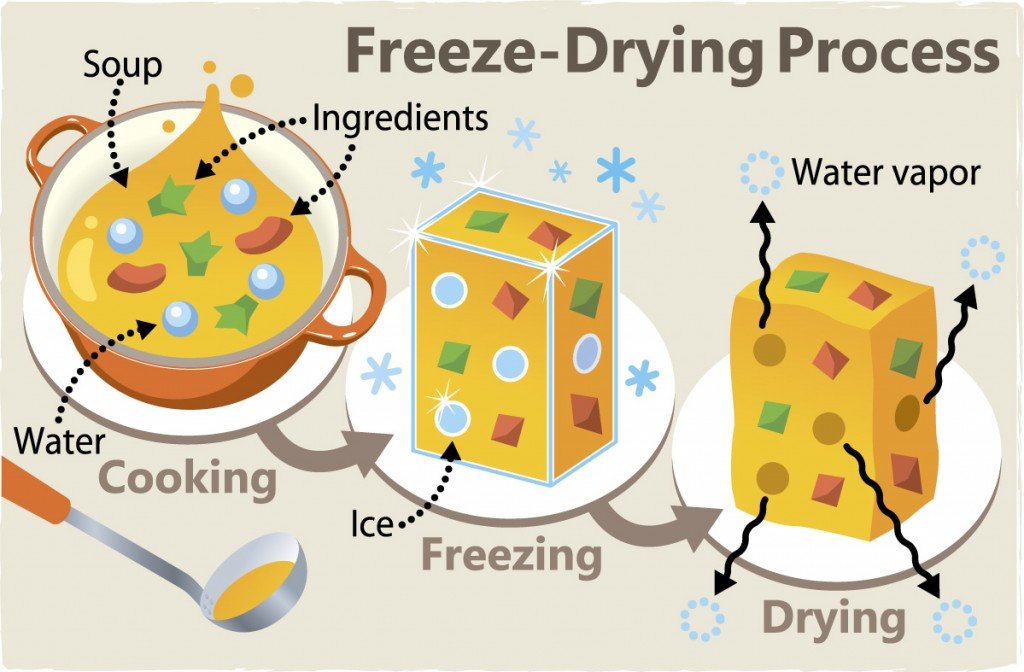 Is There a Difference Between Freeze Dried and Dehydrated?

Yes. Dehydration doesn’t use the same freezing method as freeze drying. For this reason, it removes less moisture. While dehydration typically removes up to 95 percent of a product’s moisture, freeze drying can remove up to 99 percent. Freeze drying’s ability to remove more moisture solidifies it as the best method for preserving food as the less moisture that is present the longer foods will last.

Also, dehydrated foods typically have additives which change the composition of the food. Salts and other preservatives are common choices. As a result, freeze dried foods are better for those looking to avoid additives.

How Long Does It Take to Freeze Dry Food?

Freeze drying isn’t a short process – it can take up to 40 hours in some cases, but on the shorter end of the scale, it can be done in as little as 20 hours. This timeframe will depend on the kind of food and the thickness of the product. The thicker the product you’re trying to freeze dry, the longer the process may take.

Yes. Eventually, all forms of preserved food go bad, but freeze drying your food is one of the most extended forms of preservation. The length of time it takes for a product to spoil will depend on the type of product.

For example, fruit typically spoils after just a couple of years. On the other hand, cottage cheese can last up to 30 years if it’s effectively freeze dried. Many types of meat can also last between 20 and 25 years when properly freeze dried.

The typical range of active preservation time falls between 2 and 30 years depending on the food. Once you open a freeze-dried package, however, you only have a week or two to consume it before it goes bad.

We hope this guide on how to freeze dry food has answered all your questions and helped you better understand the advantages of freeze drying. The strange paradoxes of scientific discovery is that no matter how plodding and careful science is about most developments, some of the most astounding discoveries have occurred purely by accident. The most famous of these was the discovery of penicillin.

This discovery only occurred because biologist Alexander Fleming took a vacation. Returning to find that his staph bacteria petri dishes were contaminated with an invasive fungus, he observed that the fungus had repelled and killed the bacteria. The age of antibiotics was born.

Dozens more examples demonstrate that the happy accident is one of the most valuable resources in human development. One of the earliest known examples occurred when, for better or worse, some Chinese experimenters looking for the elixir of eternal life accidentally discovered gun powder, instead.

In 1938, a du Pont chemist discovered that his experimental gas had escaped its container and that a strange slippery substance was left behind. Teflon was born. Much earlier, an English pharmacist withdrew a stirring rod from his chemicals only to notice a dried clump of hard material stuck to the end of it. In trying to scrape it off, it ignited and burst into flame.

The strikable match was the result. Velcro was invented by a Swiss engineer intrigued by how burrs stuck to his dog’s coat. The implantable heart pacemaker was stumbled upon when an assistant professor accidentally grabbed the wrong size resistor from a box.

These examples are only a few of the many wonderful discoveries that have graced the world by a scientific accident. Their value is immense, and the world has grown richer by their discovery only through the adaptability of those who discovered them. In many cases, something else was the target goal at the time. Their discovery was an unanticipated byproduct born of the flexibility of the discoverer.

From Fluke to Flourish

In business, it pays hefty dividends to be flexible enough to adapt to new developments and to make use of unexpected benefits.

As the maker of a fairly unsuccessful wallpaper cleaner, Kutol Products was near bankruptcy when children began using the product to form Christmas tree ornaments in arts and crafts projects. The entrepreneurs were clever enough to see this unexpected use as a gift, and the company was saved by the new marketing of the modified product as Play-Doh.

A similar story is told of the development of another novelty toy, Silly Putty. In 1943, a World War II rubber shortage prompted the government to commission research from General Electric chemists for the creation of an alternative. The resulting elastic compound was ineffective at replacing rubber, but it was intriguing nevertheless.

Samples were circulated, but until an enterprising toy store entrepreneur named Ruth Fallgatter saw the stuff in 1949, no one had any use for it. Fallgatter saw some potential and hired copywriter Peter Hodgson to include the item in her seasonal catalogue. While it outsold everything else in the catalogue, for some reason she lost interest and abandoned the substance.

Hitting the Mark with an Open Mind

Hodgson, however, had a clearer vision of its potential and picked up the entrepreneurial torch, renaming the product Silly Putty. It took some time, but his ability to adapt paid off. A New York Times columnist mentioned it in a very positive light, after which sales topped $750,000 in the next three days.

One Thing Leads to Another…

Speaking of gummy substances, we have alluded to the 29-year-old William Wrigley who decided to offer free baking powder as an incentive to market his scouring soap. The idea was so good that the powder became more popular than the soap. So, he offered free chewing gum to market the powder, and the gum became more popular still. Thus was born the Wrigley chewing gum empire, from humble beginnings in soap and baking powder.

Like William Wrigley, Peter Hodgson, and the brighter minds at Play-Doh’s Kutol Products, always remain alert to the potential for happy accidents and adapting to situations and possibilities. Thinking outside the box of your own business can lure serendipity right to your front door.